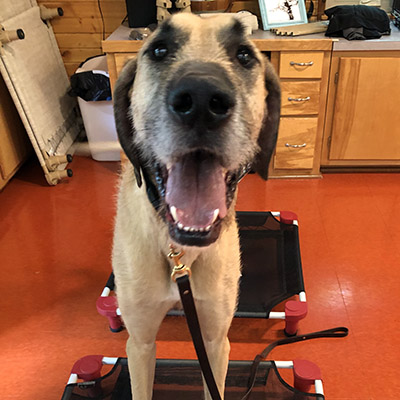 Scooby is a Great Dane from Delaware, Ohio and is a graduate of the 2-week Basic Dog Obedience Training Day Camp. That deserves a Scooby snack.

The Great Dane presents the appearance of powerful regality. It’s muscular, chiseled form added to it’s great size is impressive as much as it is intimidating. While the Dane towers over all but one other canine, it’s heart is even bigger.

For reasons unknown, Great Dane implies a relationship to Denmark. But like many breeds, Danes trace their origins to Germany. It’s believed they were bred to hunt wild boar but were also used for other hunting excusions and effective guard dogs. They were also effective in military and police operations as formidable and fearless fighters.

The Great Dane has a confirmed existance of over 400 years with potential references dating back 8-900 years. Over this time they’ve accumulated a few names. In Germany, they’re known as Deutsche Dog, or German Dog; Latin languages referred to them as dogue or dogo; Dogge was the name in Germanic languages while England called them Mastiffs. There’s two names credited to France, Dogue Allemand, or German Mastiff, and Grand Danois. The United States got Great Dane from the English translation of Grand Danois, which in France means “Big Danish”.

Trainability: B
Great Danes have a wonderful personality and are eager to be a great pack member. Their sheer size, however, can be an issue. Direct contact with a human is a sign of affection but when something the size of a college linebacker leans into you or attempts to fit its frame within your, or a visitor’s, lap, that can present some challenges. Danes also have a tendency to pull or break from walks after catching a scent. Pack leaders must be prepared to stop a linebacker with 4-wheel-drive.

Read more information about Great Danes at The American Kennel Club and The Great Dane Club of America.