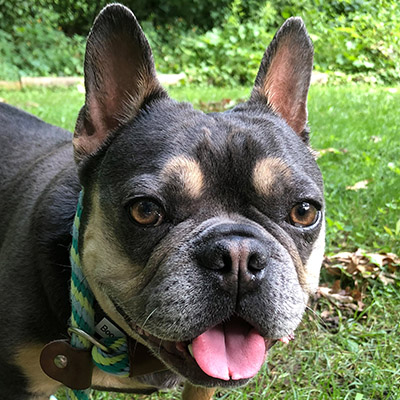 Most dogs were originally bred to perform certain tasks, whether in sport or livelihood, to aid their human pack members. This doesn’t apply to the French Bulldog. “Frenchies” weren’t bred to have any specific skills. While intelligent and muscularly built, they can’t swim, in fact, bodies of water can be lethal. They commonly have, like many short-nosed breeds, breathing and congestive issues. While prone to obesity, they can over-exert easily, particularly in warmer weather. They don’t even bark much.

Really, the only thing they seem to be good at is being a cute companion. And they do it well. These little charmers rank in at #4 as AKC’s most popular breeds.

The French Bulldog is a descendant of the bigger and badder English Bulldog. The Bulldog was bred to do one thing in life, join a group of other Bulldogs and take on a full grown bull in a life-and-death battle. The Bulldogs were trained to clamp it’s massive, muscular jaws around the bull’s nose and deprive it of air while their humans gambled on the outcome (geez, we’re a disgusting species sometimes).

After 500 years, England finally banned the “sport” and by the mid-19th century, a toy-sized Bulldog began to appear in many English cities. One city in particular, Nottingham (that of Robin Hood fame) had a well established lace industry. When the machines of the Industrial Revolution replaced the workers, many moved to Northern France where their craft was still in demand.

These toy Bulldogs quickly became popular in France. By the time they reached Paris, the traditional Bulldog “rose-ear” had been been mostly bred out and become more bat-like in appearance. They had also adapted particularly well to city-life.

Following the lace industry, the Frenchies found themselves in some of the seamier sides of the city as icebreakers for skittish customers. Within a few years, though, French Bulldogs had worked their way up to the halls of nobility throughout Europe, onto artwork, and then on to the United States before the beginning of the 20th century.

Trainability: B
The French Bulldog is intelligent with a high desire to please that lends itself well to training. Without proper socialization and upbringing, though, French Bulldogs can develop an attitude and display undesirable behaviors that can be difficult to work out.