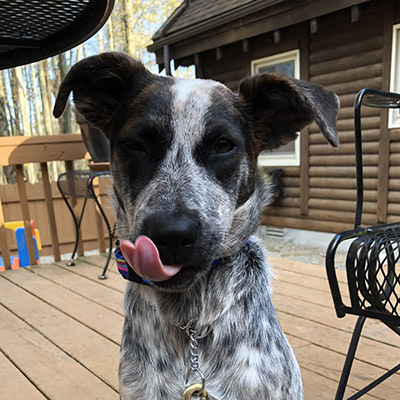 Willow is a Catahoula Leopard Dog and Bluetick Coonhound from Delaware, Ohio and a graduate of the Homestead Dogs Puppy Training and Socialization Camp. Way to Go, Willow!

Follow Your Nose
This dog was born to hunt with an amazing sense of smell…for better or worse. Whether latching on to a week-old raccoon trail or the Ritz cracker buried under your couch cushion, they will relentlessly pursue its target. Like many coonhound breeds, Blueticks were Made in the USA.

Bluetick Coonhounds trace their lineage to the French Staghound, brought to America in the early 1700’s. Tennessee settlers refined the breed for greater endurance and more acute smelling. The Bluetick was later adopted as the University of Tennessee’s sports mascot.

As the name implies, Bluetick’s were commonly used for hunting raccoons. Hunters would also form Bluetick packs for bears, cougars, boar and other larger prey.

Bluetick Coonhounds are affectionate and highly devoted to its pack members. A well-trained Bluetick is a loyal companion and great with children.

The floppy-eared Bluetick Coonhound is affectionate, loyal, very intellegent and cute as beans. They become very focused and single-minded when that nose picks up a scent, though, which can make training a little challenging. Even veteran dog owners experience difficulties with this breed. Housebreaking can also be difficult which is common for hunting breeds.

Blueticks were bred for long-distance hunting so regular, strenuous exercise is needed. Without it, some Blueticks may start to exhibit undesireable traits or even communicate their feelings…very loudly…at inconvenient times.

Blueticks may not do well with other smaller house pets such as cats and rabbits. And secure the gerbils, Blueticks are crafty problem-solvers.

Read more about the Bluetick Coonhound at the Amercian Kennel Club.