Puppy Training Near Me Ostrander >>> 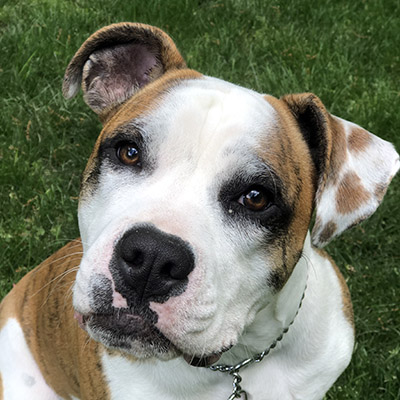 A Mother of a Dog.

The Mastiff is one of the oldest dog breeds known with references dating back nearly 5000 years and stretching from England to China. Relied on for protection, hunting and hauling materials, the Mastiff has been a valuable resource for many families through the centuries.

Mastiffs have always been good-natured and ultra-loyal to their pack, but, instinctively, are very cautious of strangers. Their protective nature combined with their massive build made them prized with the military, too. Country’s incorporated thousands of Mastiffs into their units during military campaigns.

And just as its tough to keep any military battalion from fraternizing with the locals…so too did the Mastiffs. Virtually every large breed in mountainous southern Europe can attribute it’s bloodline to the Mastiff, as can many other breeds around the globe.

Unfortunately, the world wars about did the Mastiffs in. If they weren’t being killed on the battlefield, many European cities looked down on keeping large animals that would compete with wartime food rations.

Trainability: B-
Mastiffs are eager to please, curious, good-natured and intelligent. They are very protective of their pack which makes them a little skittish around strangers. A little training and preparation usually resolves the issues. Despite their large size, powerful build and categorized as a working breed, Mastiffs don’t require a lot of exercise and is well-suited for apartment living.

Read more about the English Mastiff at the American Kennel Club and The Mastiff Club of America.

The Boxer, a fighter and a lover.

The Boxers we are familiar with today got their name because of the unique way they use their front paws when fighting or playing. But they weren’t bred for playing.

As with many breeds, their earliest ancestors date back over 4000 years to the Assyrian empire when they were utilized as “war dogs”, prized for their powerful build and impressive courage. Over the centuries, they spread across the European continent and were categorized as Molossian dogs, which included any breed with a muscular build and heavy head.

By the middle ages, the German and English were refining the breeds’ hunting skills which resulted in the ancestors to the Bullenbeisser (Germany) and the Mastiff (England). Bullenbeisser’s were particularly skilled at downing and holding larger prey and became valued as a hunting pack dog.

The English continued refining the breed and eventually mixed the Mastiff with faster hounds, which produced the Great Dane. Naturally selected smaller Bullenbeissers were later mixed with the Mastiff as dog fighting became a thing, resulting in both the English Bulldog and the Boxer.

Today’s Boxers are a little smaller and would prefer to curl up with you at night after a hard day of work or exercise than battling bulls, bears and boars…go figure.

Trainability: B+
Boxers are highly intelligent, high energy and love their humans. They seem to take naturally to guarding playing children. They can be a little bouncy when playing, though, which can be hazardous to toddlers and elderly. Boxers are generally known not to get along well with other dogs, or sometimes Boxers of the same gender. A little socialization and training reveals why Boxers are one of the favorite dogs in the United States.

Most dogs were originally bred to perform certain tasks, whether in sport or livelihood, to aid their human pack members. This doesn’t apply to the English Bulldog. Bulldog’s weren’t bred to have any specific skills. While intelligent and muscularly built, they can’t swim. In fact, bodies of water can be lethal. Some Bulldogs have difficulty navigating stairs. They commonly have, like many short-nosed breeds, breathing and congestive issues. While prone to obesity, they can over-exert easily, particularly in warmer weather. They don’t even bark much.

Really, the only thing they seem to be good at is being a cute companion. And they do it well. These little charmers rank in at #5 as AKC’s most popular breeds.

The Bulldog was originally bred to do one thing in life, join a group of other Bulldogs and take on a full grown bull in a life-and-death battle. The Bulldogs were trained to clamp it’s massive, muscular jaws around the bull’s nose and deprive it of air while their “humans” gambled on the outcome. After 500 years, the English finally banned the “sport”.

They were destined for extinction when some Bulldog lovers gathered and did some cross breeding to wean out some of the dog’s ferocious tendencies. By the mid-19th century, a toy-sized Bulldog began to appear in many English cities. They became so popular, Bulldogs became the national symbol for England and even garnering some comparisons to Winston Churchill (sure that’s a compliment for one of them).

Moving across the English Channel, the French took a liking to the breed and, after some tinkering of their own, had established a French Bulldog.

Across the pond, the United States also took a liking to the Bulldog not only as a pet, but also a symbol for everything from the Marines, to a truck manufacturer to a myriad of sports teams.

Trainability: C
Far from their “bull baiting” days, the Bulldog is intelligent with a high desire to please that lends itself well to training. Without proper socialization and upbringing, though, Bulldogs can develop an attitude and display undesirable behaviors that can be difficult to work out. They can be possessive items they consider theirs, particularly food and food bowls.

Bulldogs are sensitive to heat and over-exertion. Their face wrinkles should be checked regularly to ensure they are clean and dry. Food and moisture can get trapped and cause irritation and even infection.

Read more about the English Bulldog at the United Kennel Club and The Bulldog Club of America.