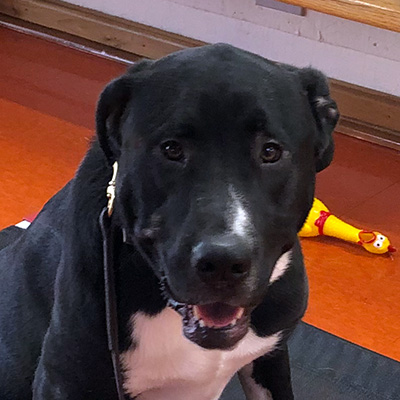 Cosmo is a Newfoundland mix from Delaware, Ohio and a Graduate of Homestead Dogs Basic Dog Training Camp. Cool, Cosmo!

As with many dog breed names, seems humans put more effort into naming boats than to a species that does so much. The Labrador Retriever originated in Newfoundland and Labrador on the island of Newfoundland. The Newfoundland, naturally, originated in the geographic region of Labrador.

It takes a hearty being to populate the north Atlantic region, particularly working the seas. And for the seafarers of the time, the Newfoundland was a vital teammate. Standing over two feet tall, the Newfoundland can bulk up to a powerful 150 pounds with a slick, oily coat appropriate for the cold, turbulant seas.

Not only was the Newfoundland a mild-tempered and loyal shipmate, they pulled their weight on board…literally. They helped with loading and unloading of cargo as well as lending a tooth to pull in the fish nets.

Newfoundlands are also amazing swimmers. While their coat insulates them from the frigid temperatures, their powerful build and increased lung capacity enable them to endure hours in the seas. Many a sailor owe their lives to Newfoundlands that dove in the water and pulled them to safety.

Trainability: B
These gentle giants love their pack and needs daily interaction. Newfoundlands are smart, affectionate and trusting and a little training and socialization will enable them to grow to a mild-mannered companion.