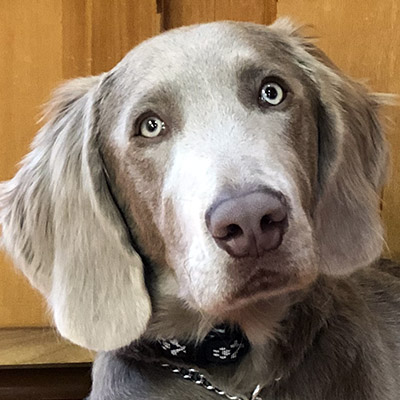 Baxter is a Weimeraner from Powell, Ohio and a graduate of the Homestead Dogs Puppy Obedience and Socialization Training Camp. Booyah, Baxter!

A fall from grace.

As with most breeds, dogs were bred to hunt something. In the Weimaraner’s case, large prey like bears and wolves. In the early 19th century, a German Grand Duke set out to concoct his vision of the perfect large-prey hunting dog. The exact ingredients the Duke used are unknown. In fact, only the highest ranking German officials even knew the Weimaraner existed and they became a status symbol within a country renown for their dog breeds.

The existence of an elusive gray hunting dog eventually surfaced and despite extensive lobbying attempts the Weimaraner remained behind palace walls…until the walls came down.

Following World War I, a German breeder finally relented and sent the first Weimaraners to the United States in 1920. The breeder insisted the new owner promise to maintain a dedication to the breed’s purity, yet still shipped two sterile Weimaraners.

Lobbying continued and increased for the next few years. After a century of secrecy, the first Weimaraner breeding stock shipped to America in 1938. By 1942, it was recognized by the AKC and participated in the Westminster Dog Show the following year. Weimaraners continued to grow in popularity, but by the early ’50s, improper breeding consequences began to be more prevalent and were increasingly found in the “free to a good home category”.

Less than 30 years after the first Weimaraners reached our shores, dedicated Weimaraner owners were working to revive the breed.

Trainabiility: C+
The Weimaraner is a very intelligent breed, which is usually great…but sometimes not. While Weimaraner’s love their pack, some owners describe an occasional “what’s in it for me” attitude. Weimaraner’s are quick learners, of both good and bad behaviors. Early puppy training and socialization with consistent reinforcement is helpful. Weimaraner’s were bred to be highly active, so an intensive exercise regimen will keep them healthy and happy.