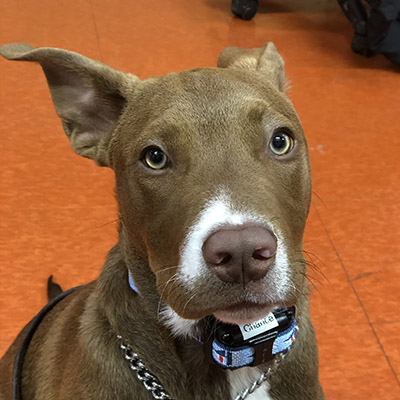 Chance is an American Pit Bull Terrier and Doberman Pinscher mix from Delaware, Ohio and is a graduate of the Homestead Dogs 2-week Basic Puppy Obedience Training Camp. Cool, Chance!

A dog with an identity crisis…and they don’t care.

Likewise, national and international dog registries vary on categorizing this breed. The Pit Bull is commonly mistaken with the American Staffordshire Terrier. The American Kennel Club and Continental Kennel Club do not recognize the breed. The United Kennel Club (UKC), however, lists the Pit Bull as dog #1 on it’s registry and the UKC is reported to have started as an organization because the AKC dissed the Pit Bull.

Pit Bulls can’t even get good press. While commonly fingered for other breeds, or mixed breeds, mis-deeds, some bad pack leaders take advantage of the Pit Bull’s exceptional skills for dog-fighting purposes, some of which make national news.

That’s a shame. In addition to their versatility, Pit Bulls make tremendous family pets that are eager to please, fun-loving and great with children. In fact, the UKC states the Pit Bull may not be the best guard dog choice as they are extremely friendly and highly unlikely to show aggression towards humans.

Trainability: B
Pit Bulls are highly intelligent, eager to please and responsive to training. They are a high-energy dog with an instinct to chase after any species that’s not human. This can be problematic on walks or in other social settings. But with lots of exercise and a little training, they make a fine addition to the pack.

Read more about the Pit Bull at the United Kennel Club and Dog Breed Info.

In the waning years of the 19th century, a man in the town of Apolda, in the German state of Thuringia, wore many hats. In addition to his work as a night watchman, he also served as the town dog catcher and dog pound administrator.

While those can be hazardous occupations, his most dangerous job was that of tax collector. After a few run-ins, he determined some protection was needed and he began experimenting with the different breeds in his pound. Starting with the German Pinscher, Weimaraner and Rottweiler, he mixed in a list of other un-documented breeds over the years. Finally, in 1890, Karl Friedrich Louis Dobermann had created the perfect protector…the Dobermann Pinscher.

As the breed became more popular, the German word for Terrier, “Pinscher”, became increasingly inappropriate and was dropped from its name in Europe (the United States retains the original name). The breed has gotten a little smaller, more fun-loving, and at some point an “N” was dropped from “Dobermann”, but they haven’t lost much else.

Besides their chiseled physique, Doberman fine-tuned the breed for high intelligence, rapid reflexes, and extreme loyalty. They also have an uncanny ability to detect threats oblivious to their pack mates and will position themselves between the threat and the pack.

These traits became highly valued in police work, search and rescue, and therapy dogs, including a highly distinguished military history.

Trainability: B
The Doberman is highly intelligent, loyal and loves to be in the company of their pack. In addition to exercise, the Doberman also likes mental stimulation, which makes them very trainable. A properly exercised, trained, and socialized Doberman is a delightful addition to the family and has earned the respect of generations of owners around the world. But deep inside, this is one professional dog and they may not do well as a casual family pet. They need a firm alpha presence in the home. If one is not available, they likely will nominate themselves.