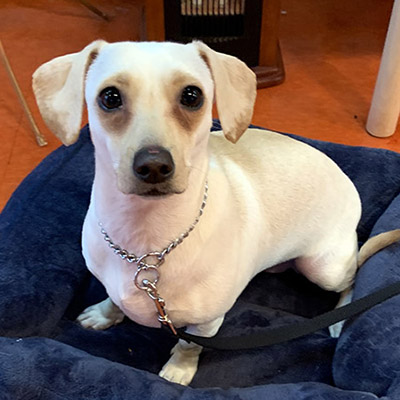 The hot dog, the wiener dog, the sausage dog … and the badger killer.

Dachshunds may be comedy gold, but this is one tough canine. While effective with above-ground prey like rabbits and boar, this breed was originally bred so its long body and short legs could easily enter and retrieve prey from tunnels and dens, most notably foxes and the very formidable badger.

As dog sports waned in Europe in the 19th century, a smaller version became very popular as a pet and had even worked their way to the United States. As with many German dogs, Dachshund popularity suffered greatly during the World Wars. But this affectionate and spunky little dog wouldn’t stay down for long and has worked their way up to 12th on the AKC popularity list.

Trainability: C
The Dachshund is a highly intelligent breed. They were bred to think for themselves within the prey’s home turf. This can lead to stubborn, independent streaks that can make training a challenge. They have a tendency of bonding more strongly with one human and can be sensitive to harsh training methods. Dachshunds love their humans and affectionate, positive reinforcement can be successful.

Read more about the Dachshund at the American Kennel Club and Dogtime.