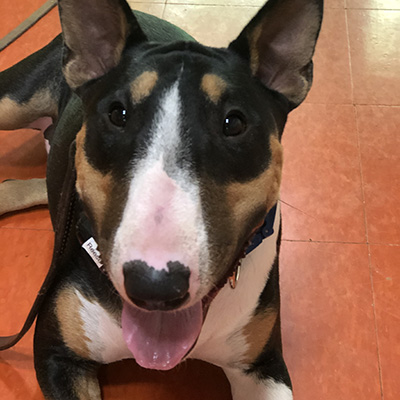 Reese is a Bull Terrier from Delaware, Ohio and a graduate of the Homestead Dogs 2-Week Dog Obedience Training Camp. Rock on, Reese!

The British used to have the rather gruesome form of entertainment called bull-baiting. A pack of Bulldogs were pitted against a large bull while gambling on the outcome. While they finally outlawed the practice in the early 19th century, those committed to the blood sport just changed tactics.

Since it’s tough to move a bull underground, they simply pit the dogs against themselves. Bulldogs were commonly used for bull-baiting, but, apparently, they were less entertaining without the bull. They began experimenting by mixing their Bulldogs with a variety of more spirited terriers. One of the favored breeds that came out of this was the Bull Terrier.

The British eventually outlawed dog fighting, too. It was then they figured out they had created, like many of these “fighter breeds”, a pretty darn good dog. Not only were they highly loyal, they excelled at agility sports and are accomplished in bomb detection, search-and-rescue and therapy dogs…and were entertaining in their own right.

Trainability: B
Bull Terriers love activities with their humans and perform well in positive, fun training. In fact, if it’s not fun, your Bull Terrier just may not be interested.

Read more about Bull Terriers at the American Kennel Club and the Bull Terrier Club of America.