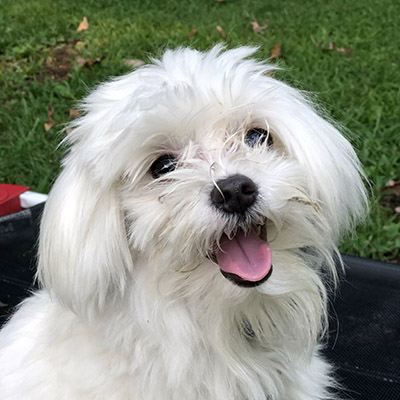 Comet is a Maltese from Galena, Ohio and a graduate of the Homestead Dogs 2-week Overnight Basic Dog Obedience Training Camp. Cool, Comet!

The Maltese has been around for centuries. Despite this, it seems the only skills they have aquired is to look cute and how to get what they want from their humans.

The Maltese is named after Malta, a tiny island-nation in the Mediterranean Sea just south of Italy. Since humans have been sailing the Mediterranean, Malta was a common trading post amongst numerous nations for various commodities like spices, silks, gemstones and a furry little white dog.

Unfortunately, due to its strategic location and small size, Malta was the victim of several conquerers including the Phoenicians, Greeks, Carthaginians, Romans, Arabs and Normans. It’s the Phoenicians that are believed to have introduced the Maltese to Malta and from there were traded to seafarers the world over.

Ancient Greeks were fascinated with the “Melitaie Dog”, commonly depicting them in artwork, ceramics and even building tombs for them.

During the Roman Empire, the Maltese became a status symbol and fashion statement for the aristocrats. A Roman lady wasn’t fully dressed without one. As the Roman Empire began to crumble, so, too, did the Maltese population, but they managed to find their way to China. Here, the Chinese bred the Maltese with their native toy dogs to create Maltese we know today.

The Maltese eventually worked their way back to Europe. In 1877, they were introduced at New York’s first Westminster Dog Show as the Maltese Lion Dog.

Trainability: B
Maltese are very intelligent canines and are very accustomed to being around humans. Like most dogs, they respond well to positive training strategies, but they can be a little stubborn at times. Due to their small size, they don’t need a lot of exercise. Generally a run-around the back yard or even inside will suffice.

Maltese are athletic and commonly do well in agility and obedience feats.