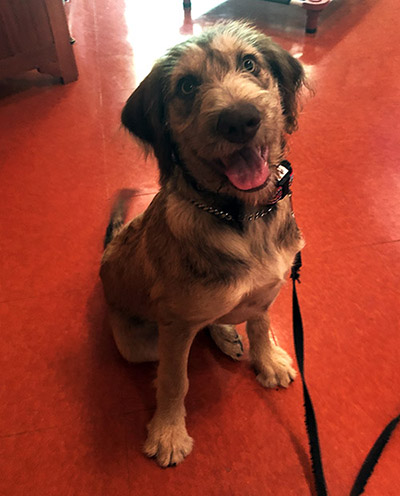 Heidi is a Labradoodle from Delaware, Ohio and a graduate of the Homestead Dogs 2-Week Basic Dog Obedience Training Camp. We’re happy for Heidi!

Doodling in the Lab

In the 1980’s, a guide dog breeder in Australia received a request from a blind woman in Hawaii. Labrador Retrievers are a natural and common guide dog given their loyalty, trainability and pleasing disposition with humans, children and other animals. But the woman’s husband was allergic to Labrador Retrievers.

The breeders original attempts revolved around poodles since their non-shedding coats were more tolerable to people with allergies. Unsuccessful, he finally crossed the poodle with a Labrador Retriever. While technically not hypoallergenic, the husband could tolerate this new hybrid breed and they adopted one of the pups.

Meanwhile, there were two other pups still in the litter and he was having difficulty finding homes for them since they “crossbreeds”. With a little re-branding effort, he coined the name Labradoodle, and a star was born.

Soon, requests from around the globe came in for these adorable “designer” dogs. Their popularity skyrocketed and other breeders joined in and began to breed not just Labradoodles, but other varieties of “Doodles”.

In the United States, breeders simply kept mixing Poodles and Retrievers to keep up with demand (and keep the money coming in). This has led to inconsistancies in the litters and has kept them off the AKC breed listing. Labradoodles in the United States can vary widely in size, color, shape, size and personality. In Australia, however, an effort was sustained to maintain and develop some breed standards and today Australian Labradoodles are considered pure-bred canines in Australia.

With its regal appearance and fancy hairdo, at first glance the Poodle appears to be the breed destined for luxury with the nobles. That would be an underestimation.

Some of the information used for the dog breed descriptions was gathered from Ryan Millers USA Today article, “A Frankenstein Monster”: Why the Labradoodle creator regrets breeding the dogs.