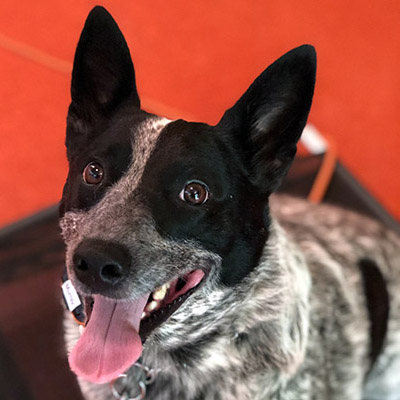 Murray is an Australian Cattle Dog from Delaware, Ohio and a graduate of the Homestead Dogs 2-week Basic Dog Obedience Training Camp.

Some of the dog breed names can be real head-scratchers. While a little boring and lacking in marketing appeal, this breed name is spot on.

Just as in the United States, Early 19th century European “Settlers” began to migrate westward to the Australian continent’s interior and found it ideal for raising cattle. A good working dog was in order. But, while the US interior can have challenging weather, the Australian interior can be down-right brutal for man, plant and beast.

These migrants brought their English herding dogs, Smithfields, but they were unable to adapt to the extreme weather and terrain. To boost the dog’s durability, the Smithfields were crossed with other breeds, most notably Dingos, a breed originally brought to Australia by its earliest human inhabitants, but had since formed packs and existed successfully in the wild for centuries.

While a better combination was later found using Dingos and Collies, decendents from this pairing were mixed with Dalmations to develop a breed that was more loyal and comfortable around horses. While close, ranch hands noticed a drop in this latest creations’ working ability. Finally, a dog with a respected work ethic, the Australian Kelpie, was worked into the mix to create the Australian Cattle Dog we know today.

The Australian Cattle Dog is highly intelligent and a loyal pack member, but this breed is extremely high-energy and was born to work. A walk around the block won’t cut it with these dogs, they need a highly intensive workout with agility or sporting events being great options. They can be a great family pet, but be prepared to spend time with them.

Some of the information used for the dog breed descriptions was gathered from the American Kennel Club and the Australian Cattle Dog Club of America.