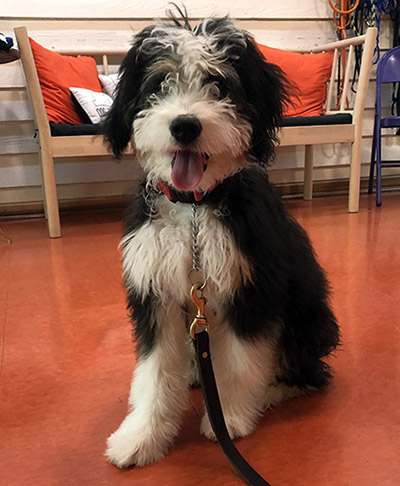 The Bernadoodle is a hybid mix between a Poodle and a Bernese Mountain Dog. They are not an official AKC-listed breed and considered by some to be a “designer breed”. No puppies are going to be a 50-50 mix in parent traits so there can be some variance in any one Bernadoodle. Just in size alone, the Poodle is available in small, medium and large which will naturally affect the Bernadoodle’s size (10-90 pounds).

They also have levels of Bernadoodles. A Bernadoodle is mixed with a Poodle or a Bernese Mountain Dog to create a 75-25 mix.
No matter how you mix the ingredients, the Bernadoodle is made up of some pretty good canine genes and will end up with a pretty great pup.

With its regal appearance and fancy hairdo, at first glance the Poodle appears to be the breed destined for luxery with the nobles. That would be an underestimation.

Known as the Berner Sennehund in their native Switzerland, Bernese Mountain Dogs have been a utilitarian staple on Swiss dairy farms for over 2000 years. Their descendents were brought in by invading Roman soldiers and over time developed a breed ideally suited for the Bern area farmers.

“Berners” were bred to be intelligent to perform a variety of tasks around the farm, most notably, guard dog and pulling weight, or drafting. With powerful legs and shoulders, Bernese Mountain Dogs have been known to pull many time their own weight.

Their numbers began to diminish once mechanized farming became more popular towards the end of the 19th century. But some good PR efforts by Berner fans brought the breed back and by the beginning of the 20th century had made their way to the United States. Today they rank in the top-25 most popular dogs on the AKC listing.

It’s easy to see why. While Bernese Mountain Dogs can be shy around strangers, they love the humans in their pack. They are famously good and gentle with children but are ready to crank it up a notch when playing with an adult. One job many Berners have been known to enjoy is pulling children around.

Trainability: B-
Bernese Mountain Dogs are smart, affectionate and love to be with and please their humans. They can be prone to separation anxiety and their feelings can get hurt. But if you keep it fun, you’ll have an eager partner in training.

Some of the information used for the dog breed descriptions was gathered from the American Kennel Club, the Bernese Mountain Dog of America, the Poodle Club of America, and Bernadoodles.