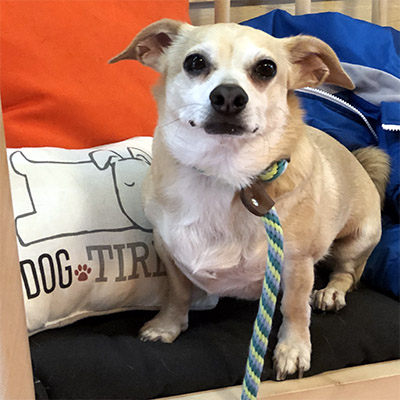 Mike-Mike is a Chihuahua from Galena, Ohio who graduated from the Homestead Dogs 2-week Basic Obedience Dog Training Camp on April 17, 2020. Congratulations Mike-Mike!

The intelligent little Chihuahua is a national symbol of Mexico and is one of the oldest breeds of the Americas. But their complete history is a mystery. Images of dogs very similar to the Chihuahua have been found on artifacts of ancient civilizations around the world.

The Aztecs are credited with creating the Chihuahua we know today. The Aztecs are believed to have refined the Techichi breed they found after over-throwing the Toltec people in the 12th century. The breed was believed lost after it’s second civilization was killed off by the Cortez invasion in the 16th century, but managed to find salvation in smaller, remote villages throughout the region.

By the time Americans became infactuated with the breed in the mid-1800’s, they had worked their way up to the northern Mexico. In their search, the Americans found a bunch of Chihuahuas just across the Texas border in the Mexican state of Chihuahua.

The little Chihuahua can be fragile. Jumps from seemingly short distances can be hazardous, for instance, even stairs and furniture. Children and toddlers can also be hazardous with air-borne objects and toys to rough-housing and even food droppings all being potentially fatal.

Numerous foods and beverages can be toxic to Chihuahuas, including, fruits, vegetables, cafinated or alcoholic beverages, raw bread dough and cooked fat trimmings and chicken bones.

Chihuahuas maintain a higher metabolism than most breeds and should eat high-quality dog foods. Puppies should always have access to food to prevent hypoglycemia. The Chihuahua Club of America recommends having a nutrient supplement like, Nutri-cal, Nutri-stat or VitaCal on hand before you bring your Chihuahua puppy home. A high-stressed or under nurished Chihuahua puppy can quickly become afflicted with hypoglycemia if not closely monitored. Chihuahua puppies can also be succeptible to cold.

Trainability: B-
The Chihuahua is highly intelligent…maybe too intelligent. Quick to learn, if not careful, the trainer becomes the trainee.

Some of the information used for the dog breed descriptions was gathered from the Chihuahua Club of America and the American Kennel Club at www.akc.org.